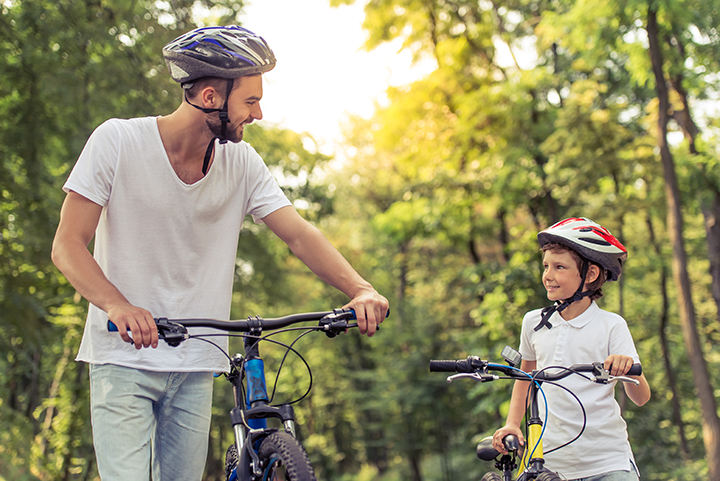 This area was first inhabited by the Moundbuilders, then later by Wyandots, Delaware and Shawnee. Belmont County was one of the earliest areas settled in Ohio, and the scene of several bloody conflicts between settlers and Indians. Prior to the Treaty of Greenville of 1795, the nearby Ohio River was the accepted boundary between Indians to the north and settlers to the south of the river. Conflicts arose as land-hungry settlers began encroaching on Indian lands. The celebrated Indian fighter, Lewis Wetzel, was often through this region. Wetzel instigated many of the conflicts as Indians were the object of his mortal hate. A large boulder near the park's Antique Barn bears an inscription carved by Wetzel.

The Society of Friends (Quakers) established the first church in the area. Benjamin Lundy, a Quaker who lived in St. Clairsville, became known as the "Father of Abolitionism". He formed an anti-slavery society here in 1815 called the Union Humane Society. At one point, there were 120 miles of the Underground Railroad in Belmont County. Lundy helped produce the abolitionist paper, The Philanthropist at nearby Mt. Pleasant.

As years passed, coal was discovered and became the foundation of the area's economy. Belmont County is now the state's leading producer of coal with an estimated 5,668 million tons of coal available below the earth's surface.

Land acquisition began for the park in 1955, and a dam was completed in 1963 resulting in the 117-acre Belmont Lake. The park derives its unusual name from Barkcamp Creek, the former site of a logging camp where logs were stripped of their bark in preparation for delivery to the mill.

120 have electricity
27 are designated as equestrian sites
14 are tent only, with no pets allowed
3 are ADA compliant sites
1 group tent camping site may be reserved in advance (up to 66 people) and has 11 picnic tables
Dump station
Mini golf course and playground
Pet camping is permitted on designated sites
Horse washing station
Accessible mounting ramp

Hand powered boats and boats with electric motors only are permitted on 117-acre Belmont Lake. Seasonal boat tie-ups are available. One launch ramp provides access to the lake. Swimming from your boat is NOT allowed.

Anglers will enjoy good catches of bass, bluegill, crappie and trout. A wheelchair accessible area allows all people to test their skill at fishing. A valid Ohio fishing license is required.

Several picnic areas are located around the park. Each area provides tables, grills, water and latrines. Three shelterhouses are available.

A 700-foot beach provides enjoyment for swimmers and sunbathers. Swimming is permitted in designated areas. Please exercise caution while swimming at the beach. Pets are NOT permitted on swimming beaches.

There are 4 hiking trails in the park:

A special paved trail winds through the pioneer village, enters the adjoining mature woodlands and provides access to the Antique Barn. Interpretive signs are placed along the route explaining the cultural and natural history of the park.

A bit of American history is preserved in the camp area. The Antique Barn was built in the 1800s by Solomon Bentley, an orchardman of renown. One variety of apple that he marketed was the "Bentley Sweet." The barn is now home to summer naturalist activities and historical displays.

A resurrected log cabin and other pioneer structures near the barn take visitors back to an even earlier era.

Barkcamp State Park is not affiliated with AmericanTowns Media
Share